DJ edits of hit songs are everywhere, but the artists of the original music have not been properly compensated for the use of their works — until now.

Whether you’re driving to the club, dancing at the club, or pounding tequila shots at your best friend’s wedding, carefully crafted tracks — parts of which have been sped up, slowed down, loudened for affect, and quieted for introductions and commentary — are soundtracking countless festivities and events. While original creators in these cases are supposed to be paid performance royalties (something that’s easier to police on the radio than at a wedding, for example) they do not earn per-play monies à la streaming. Why? An accessible, DJ-first platform with the appropriate, licensed music just doesn’t exist. On Thursday, August 5th, however, rookie company Beatsource is set to announce just that, thanks to just-finalized licensing deals with all three of the major label groups and multiple indies, Rolling Stone has learned.

Inside the 24/7 Influencer Competition for a Major Record Deal

Two Los Angeles-bred DJs, President Brian “Quickie” Wong and Chief Content Officer Edwin “Phenom” Paredes, partnered with Beatport, a DJ hub and long-established leader of the dance-music scene, to found the genre-agnostic Beatsource in 2019. Prior to that, the duo — who’ve worked together since 2005 at DJcity, a smaller networking platform that Wong runs — had been trying to secure the proper label deals for about a decade, Wong tells Rolling Stone. As they unveil a new streaming arm, called Beatsource Link, which will house an exclusive library of about 100,000 artist and label-approved tracks, it appears their determination has paid off.

“These DJ edits, which are not full-on remixes but adapted versions of songs, were never licensed before,” Wong says. “We were in conversation as a small little company, DJcity, trying to get this done. No one was opposed to the idea because the problem was clear, but it was too small of a problem at the time. They had other priorities.”

That’s an understatement: The entire music industry, which was outright booming at the end of the Nineties, suddenly faced a first-of-its-kind death rattle just a few years into the 21st century, shortly after Napster arrived and MP3 piracy exploded: CD-worshipping executives in every corner of the business wondered how they were going to successfully monetize something intangible. But, in business and personal lives, digitalization became unavoidable.

A quick history lesson: When hip-hop began to blossom in the late 1970s, DJs were equipped with vinyl records, turntables, and just a couple of breakbeats. CDs would then rise in popularity throughout the Eighties and Nineties, ushering in the idea of the mobile DJ. Pioneer DJ created the first CDJ player in 1994. By 1997, a University of Auckland student named Steve West, who’d go on to co-found audio software company Serato, was learning to play the bass guitar. According to Serato, West grew frustrated while trying to slow down complicated bass solos without altering the pitch. That struggle inspired West to write the algorithm for Serato’s first product, Pitch ‘n Time, which launched in 1999. A year later, Serato, which would only continue to innovate, introduced Scratch Studio Edition, a Pro Tools plug-in that allowed its users to “scratch” digital files on their computers.

Laptops outsold PCs for the first time in 2008 — the same year that a little Swedish company called Spotify was officially born. (Spotify, however, would not launch in America until 2011.) By 2015, music streaming had become all the rage. Forced to adapt, the music industry had behemoth fish to fry — and gatekeepers placed the issues of DJs on the backburner.

Creatively, DJs were thriving at this juncture, and they had more editing options than ever before. “That moment unlocked everything for DJs,” Wong explains. Yet, these tracks still had no home; there was no “Spotify for DJs.” This wasn’t a secret, but the rest of the industry was too busy frantically scrambling (and downsizing) to figure out how to make the consumer-centric streaming model profitable. “With digital DJing, you could make your own stuff, and that’s what everyone did. That’s when mash-up culture evolved.”

Before, he points out, the average DJ could only play what they could go out and physically buy. Paredes explains a DJ’s typical workflow back then: “You’d hear a song somewhere, you’d have to Shazam it or save it and then go to a store that had an MP3 opportunity — and now, most of them don’t. So, you’d buy it, download it, put it in a folder, jump it to your DJ software, upload it, tag it, and then play it. There were too many steps.”

“We’re fixing what we think is essentially a 40-year problem. We saw this most recent wave happen. There was a tectonic shift. And we’re literally the last dinosaur in the culture that still uses MP3s.”

“DJs evolve with the culture,” Paredes says. “Historically, DJs have always pivoted quickly to whatever was at the forefront and capturing people’s attention. Because of that era of remixes, mash-ups, edits, and the ability to flip songs, we could add a drum beat on top of a Michael Jackson a cappella, or whatever, and that would rock the party. It worked for us. For our world, [that time] was great because it gave us a lot more freedom. It gave us the tools to do it independently.” Unfortunately for everyone involved, though, they weren’t doing anything officially or easily — but the DJs didn’t really have a choice.

Back when radio was king, record-label-promotion departments would give DJs multiple copies of a record, and the copies would have things like a clean, a dirty, an instrumental, and an a cappella version. (Some context: Radio DJs needed the instrumental from a current hit to mix into the next song, the host would talk, and then they’d drop into the original. Sometimes, they’d need transitions to change the tempo; when a DJ plays a fast song after a slow song, they have to have a way to get there.) But in today’s world, superstars like Drake can tweak their songs up until the last minute, delivering the record hours before it’s due. That means the promo department doesn’t have time to send DJs their clean edits, for example, so DJs rush to do the work themselves. 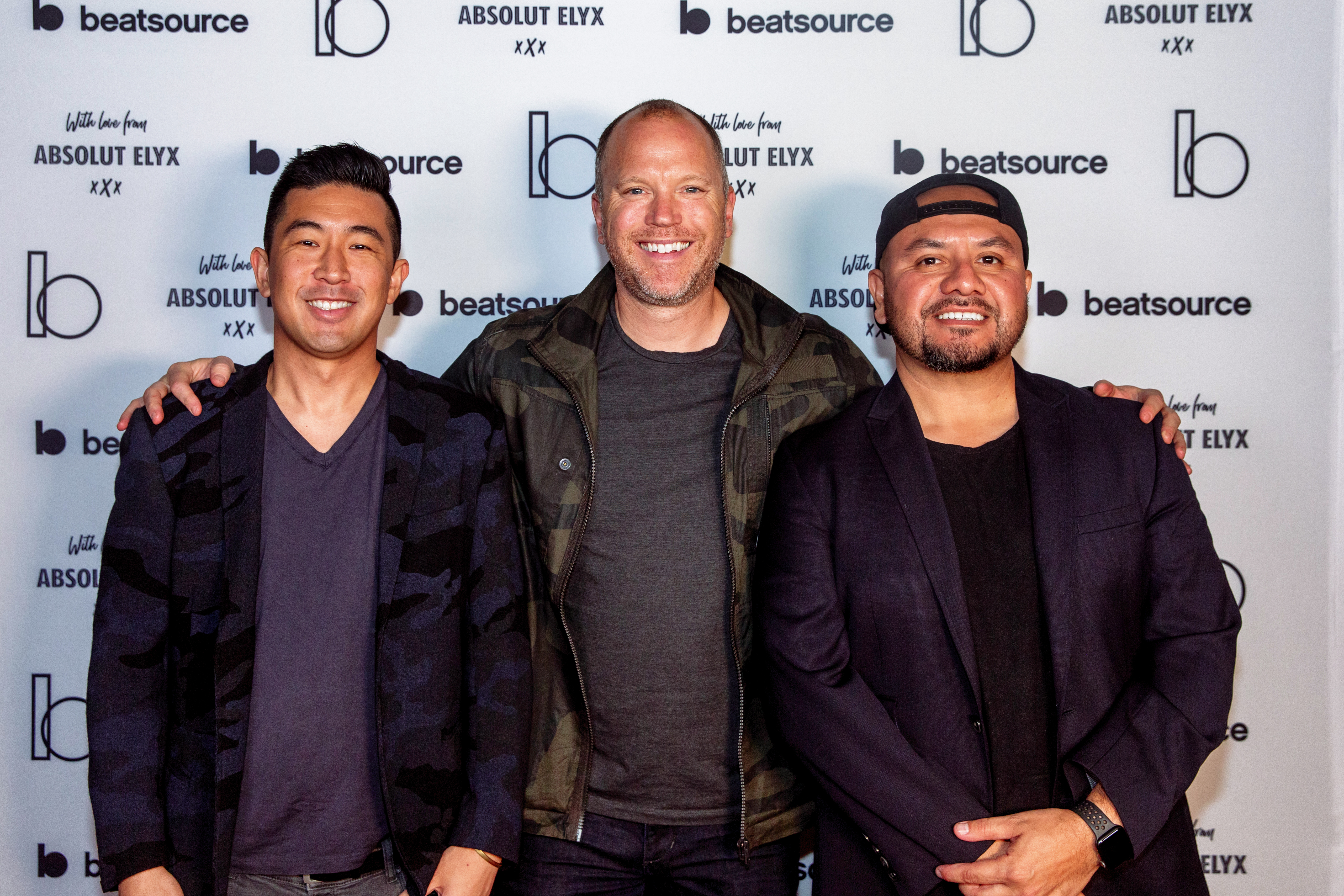 “Not only do we have the versions that DJs have been waiting for, but they’re officially licensed and in a streaming service. Every time we play a song, the artist will get royalties.” (From left: Brian “Quickie” Wong, president of Beatsource, Robb McDaniels, CEO of Beatport, and Edwin “Phenom” Paredes, chief content officer of Beatsource.)

Moreover, promo reps would often send said edits as MP3 attachments in emails, which makes their usage exceptionally difficult to track. “Once they left their outbox, they didn’t know what happened to those files,” he says. “Now that we control it, we’re fixing what we think is essentially a 40-year problem. We saw this most recent wave happen. There was a tectonic shift. And we’re literally the last dinosaur in the culture that still uses MP3s.”

With Beatsource, the labels can send all the necessary edits to one place with a few clicks the moment they approve them. Beatsource’s team can then upload them to the service immediately, according to Paredes. This way, every time a cooperating DJ uses an edit, Beatsource’s tech tracks the activity, ensuring rights-holders are paid fairly. And if the label doesn’t want to make all those types of edits, Beatsource can do it for them. “And, like [the labels] like to tell us, a stream is a stream,” says Paredes. “Whether we’re playing the clean edit, the instrumental, the a cappella, or whatever, it pays out to the original artist.”

Beatsource also aims to liaison with labels’ promo teams and business affairs department, making sure the two are on the same page. According to Paredes, that’s not always the case in an industry that is shockingly disorganized to someone on the outside looking in. These promo teams, he explains, are sometimes more focused on getting the DJs everything they need as fast as possible in order to boost a song’s exposure and top charts — even if that means leaving the legal executives, who go over all the backend fine print, in the dust. “The business affairs department doesn’t necessarily work with the promo department,” he says. “It’s like they won’t talk to each other. They’re too big of a machine. When we came in, we were able to fix that.”

So, what were DJs playing all this time? Where were they getting their music if they weren’t emailing with record executives? Spotify, Amazon, iTunes, and similar platforms don’t have these versions. “That’s where the problem is,” says Wong. “Ever since streaming services came about, they just weren’t available. They were accessible on the black or gray market. Everyone knows how they’re getting them, but there’s no structure.” Nowadays, it’s not uncommon for a new, indie artist to forgo physical product and take a DIY approach, uploading singles directly to streaming platforms, and since a radio campaign is no longer a make-or-break necessity, it’s not surprising that they’re not creating alternate versions.

The joint venture opportunity with Beatport finally gave Paredes and Wong the boost they needed in their negotiations. “We were showing up with bags of money, basically, but we couldn’t get a deal done,” says Wong. “With the scale of Beatport and this technology that we didn’t have before, which allows us to track the plays and keep the DJ-edit content in a closed environment where you can’t just download it and file share it with everyone, we were able to move forward. “DJs were left behind in the streaming world,” says Wong. “Not anymore.”